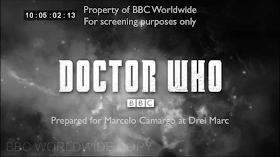 Like the first workprint, this one is also in black and white, with missing ADR and finished CGI, although it isn't cropped for an unknown reason.

It can be presumed that the other three episodes will follow in due course.

BBC Worldwide gave an update last month thanking fans for keeping spoilers at bay and they have performed disciplinary action.

As before, please keep links and spoilers obtained from this leak off the site. Thanks.
PCJ at 20:50

No swearing, and keep it family friendly, please, or the Silence will remove it from everyone's memory!